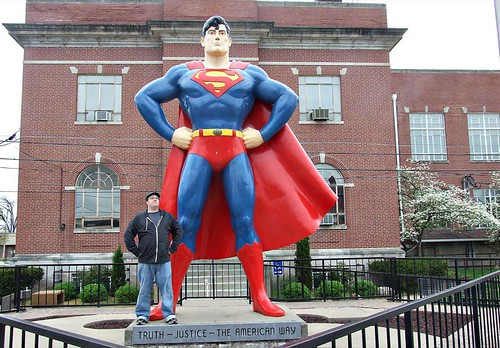 As a new reader, growing up, I was never that into Superman. He was the ultimate Mary Sue. Super strong, super fast, nearly invulnerable, Kryptonite his only weakness; what’s the fun in that? He truly earned his nickname of the big, blue boy scout. Good and altruistic to the core, there seemed to be no darkness in him, no conflict and few shades of gray. Besides, I was a Marvel guy. Spiderman and Iron Man, the X-Men and Conan the Barbarian, they were the one’s I followed month to month. Even when I started buying comics on my own, my first purchase was Ghost Rider. I always wondered what that said about me, that my first choice for a comic book was a vengeance demon from Hell. Even when I started branching out, it was years before I even looked twice at a DC comic. It was their Vertigo line that caught my attention with titles like Preacher and Hellblazer. Even then, I was attracted to the dark and edgy titles; Superman sure as hell wasn’t on my radar. But then a few titles caught my eye and I took the plunge. Now I’ve found a few stories that write Superman in such a complex and vulnerable way that I was sold. These are the stories that convinced me to love Superman.

Holy shit, this comic book miniseries is frickin’ awesome. It helps that it was created by the power duo of Grant Morrison and Frank Quietly. I’ve waxed poetic about Quietly earlier, so you know my fan boy man crush on his art, but Morrison really outdoes himself with the story telling in this one. It begins with Superman dying. He has absorbed so much solar radiation, the yellow sun being the very source of his power, that it is breaking him apart. It also has supercharged him, so that during his last few days, he is stronger, faster, smarter, etc. than ever before. He’s always felt responsible for, well, the entire planet, so he knows he needs to get his affairs in order. What follows is a 12 issue tale that pens the Kryptonian with such warmth, such humanity, that I was completely won over.

Does he fly? Does he use his heat vision and bend steel with his bare hands? He does, but many of the challenges he overcomes take far more than brawn or powers. He shows compassion to his enemies and love for his friends. His father’s funeral will break your heart and his date with Lois Lane will make your heart swell. You will be introduced to novel aspects of his story, like black Kryptonite and Bizarro World and a super-powered Lex Luther. Yeah, I’ll be talking about other great Superman stories, but this is the one. This is the story that overcame my disinterest in Superman.

What’s So Funny About Truth, Justice and the American Way

Written by Joe Kelly, this story appeared in Action Comics #775 in the March of 2001 and was called “the single best issue of a comic book written in the year 2001”. Wizard Magazine called it the “Greatest Superman story of all time”, which should prove that I am far from alone in my praise. It was also developed into an animated feature in 2012, called Superman vs. The Elite, which is worth seeing. As the name would imply, Superman encounters a new “superhero” team called the Elite. They clash in their methods in that, while Superman does not kill, the Elite have no qualms about it. This escalates into an all-out brawl where the Elite basically mop the floor with the Big Blue Boy Scout. Then things get interesting.

Seeing Superman turn bad-ass is always a treat. The juxtaposition between someone who is so morally good that it’s almost sickening and an alien being with nearly god-like power and no sense of restraint has been a winning recipe in a number of different stories. That’s what Bright Burn banked on, but What’s So Funny About Truth, Justice and the American Way may be one of the earliest stories to lean into it. It was written at a time when superhero comics were getting grittier, more violent and central to the plot is the question, “Has Superman’s time passed?” Let’s just say that Superman convinces the Elite, and the world at large, to be happy with the way he is. Cause they won’t like the alternative.

I’ve already talked about the storyline of Superman going bad , but I don’t believe anyone takes it as far as Irredeemable. Written by Mark Waid, for Boom Comics, and spanning an impressive 37 issue run, it featured a Superman copy called, the Plutonian. Superman, being one of the most powerful and idolized superheroes on Earth, has always had the weight of the world on his shoulders, but he had the mental stability to handle it. The Plutonian does not. He cracks under the pressure and lashes out at both his superhero team mates and the entire world. As I said, there are other stories like this, but none have a 3 year time span to explore the concept as fully. The title is completely appropriate, as well; this character does reprehensible things. I should mention that Boom comics put out a related comic called Incorruptible, also by Mark Waid, but it doesn’t live up to Irredeemable. In it, one of the Plutonian’s enemies, Max Damage, is so shaken by the Plutonian’s turn to evil, that he becomes good. It’s a good concept, but it just doesn’t read as well.

So, why am I including this Superman knock-off in a piece specifically about Superman? A few reasons. In addition to the blatant similarities, it is revealed that the Plutonian’s powers are mentally related, or psionic, rather than physical. This is a reference to a research paper published back in 2009 that stated that, with the breadth of Superman’s powers, it would break the laws of physics if they were physically based and, therefore, they had to be supernatural in nature. Also, at the end of Irredeemable, the very last issue, Waid makes it perfectly clear that the entire thing is a gorgeous homage to Superman.

Conceived and illustrated by Alex Ross and written by Mark Waid, Kingdom Come presents Earth on the brink of disaster from the multitude of vigilante superheroes that have populated the planet. Much like What’s so Funny About Truth, Justice and the American Way, a younger breed of superhero, one who doesn’t mind the use of lethal force, has come into favor and the public has turned away from Superman. As a result, he has sequestered himself in a holographic Kansas, away from the world. But with violence spiraling out of control, a militant Wonder Woman convinces him to return to the fight. There begins a battle of the wills, with Superman determined to stick to his ethical refusal to kill and nearly everyone else screaming for blood. As if this weren’t enough, mankind has generally grown sick of all these living weapons running around and generally, making the world a dangerous place to live in, so they’re planning to take drastic action on all the capes, both good and bad.

I’ve already written about how much I love Ross’ artwork and that is one of the best parts of this graphic novel. The story itself is told through the eyes of a minister who feels as if God is showing him all the events unfolding so that he can save the world. There is great comic book action here, but also complex ethical struggles that are rarely seen in the superhero world. My copy of this graphic novel is almost as well read and tattered as my copy of the Watchmen, which, by the way, is falling apart.

In 2010, J. Michael Straczynski took over as writer for Superman and DC’s Dan Dido wanted him to re-invigorate the character. What emerged was a 14 issue run called, “Grounded”. The events of the previous run,” New Krypton“, finds Superman feeling disconnected from Earthlings and wondering if he can truly be the planet’s protector any longer. Disillusioned and lost, he decides that in order to get back in touch with the common man, he’s going to travel across America. And since he can’t connect with them from 20,000 feet in the air, looking down on them from above, he decides to walk the length of the country.

It’s a great look into Superman’s psyche, a god among men, trying to understand their experience as mortals. Once again, this is a story that in which his powers are useless. There’s no enemy to defeat nor disaster to overcome, while the run isn’t devoid of action, its main theme is Superman’s soul searching. My main complaint about the character Superman is that he can’t be beat, but this story shows that he isn’t immune to self-doubt. During his walk across America, he encounters very human problems. People with life-work issues, loneliness, domestic abuse, joblessness and poverty. Problems for which super strength and heat vision are useless. Grounded was a great run that showed a side of Superman that has rarely been explored and it’s written amazingly well.

Runner Up: The Incident

In 2011, DC published Action Comics #900, a title primarily featuring Superman, and ran a story called “The Incident” written by Paul Cornell. While not as deep or meaningful as the stories I have discussed above, nonetheless, I feel that it’s a story that deserves to be mentioned. It’s set in Iran, where a group of peaceful protesters are being attacked by Iranian soldiers and Superman swoops in to save the day. While, on the face of it, this is a straight up heroic act, it angers both the Iranian and American governments. Basically, this is because both governments consider Superman an exclusively American asset. As such, Superman’s actions could be considered an act of American aggression, maybe even a declaration of war. Realizing his duty is to protect the entire planet, not just the U.S., he publicly renounces his American citizenship.

While this was a nifty development for Superman’s story, what was really amazing was how much of a fervor this caused. The news story that Superman had renounced his citizenship was carried by everyone from Fox news to the New York Times and it caused such an uproar that DC comics back tracked on the story, labeling it a “What if” story. It goes to show what an icon Superman is, that a 70 year old comic book character is still so important to so many people.